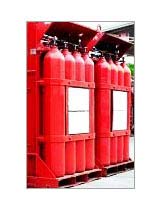 Hydrogen Gas is the simplest, lightest element in the Universe. It is made up of one proton & one electron. It is light as it scatters immediately upward in the air. It is non polluting. It is a energy carrier It is not energy it self, but requires energy to produce it. It has more energy per weight, but less energy per volume than any other fuel.It is normal gaseous state it is colourless, odourless, tasteless & non toxic. We provide packaging of Hydrogen gas in Cylinders,  Manifolds and  Pallets.

Clean fuel for cars
But also, hydrogen is one of the cleanest fuels because when it burns, the result is simple water. That is why there are efforts to create engines that can power automobiles on hydrogen. This would greatly help to reduce the air pollution and global warming problems.

Health
Hydrogen gas is odorless and nontoxic but may induce suffocation by diluting the concentration of oxygen in air below levels necessary to support life.

Caution
The amount of hydrogen gas necessary to produce oxygen-deficient atmospheres is well within the flammable range, making fire and explosion the primary hazards associated with hydrogen and air atmospheres.

Flammability
The wide flammability range, 4% to 74% in air, and the small amount of energy required for ignition necessitate special handling to prevent the inadvertent mixing of hydrogen with air. Care should be taken to eliminate sources of ignition such as sparks from electrical equipment, static electricity sparks, open flames, or any extremely hot objects Hydrogen and air mixtures, within the flammable range, can explode and may burn with a pale blue, almost invisible flame.